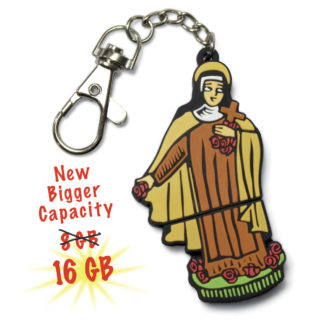 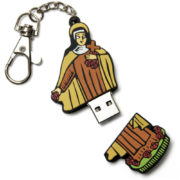 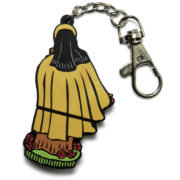 Saint Therese, in colorful and durable PVC, houses a 16GB flash drive and comes with a handy clip so you can bring this saint with you wherever you go.

Saint Therese of Lisieux was born in France in 1873. Her parents, both canonized saints, raised five daughters who all entered the religious life. Therese, the youngest, entered a Carmelite convent when she was 14. There she began to develop a path to holiness that she called her “Little Way”. This simple practice offered to God the smallest things as sacrifices; a smile for that irritating person, a choice not to defend herself when falsely accused, even each stitch as she sewed. Saint Therese described these sacrifices as flowers given to Our Lord. She hoped that He would look on her small, childlike gifts of love, take pity on her littleness, and lift her to heaven. This idea eventually led to her being affectionately dubbed the “Little Flower”. Saint Therese died of tuberculosis at the age of 24, less than ten years after she entered the convent. Her writings were collected, printed and distributed to other convents. From there her ‘Little Way’ spread to lay people who found that it gave them practical tools to pursue holiness in their ordinary lives. This teaching proved so effective that Saint Therese was declared a doctor of the Church. Her feast day is October 1.

Saint Therese, in colorful and durable PVC, houses a 16GB flash drive and comes with a handy clip so you can bring this saint with you wherever you go.